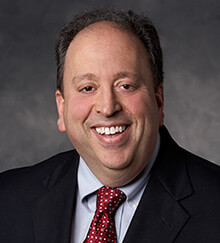 Dr. Glenn Chertow is the Norman S. Coplon Satellite Healthcare professor of medicine and chief of the Division of Nephrology at Stanford University School of Medicine. He completed his undergraduate education at University of Pennsylvania and medical education at Harvard, as well as his residency in internal medicine and fellowship in nephrology at Brigham and Women’s Hospital before joining the Harvard faculty, where he remained until 1998. Dr. Chertow then joined the faculty at University of California San Francisco (UCSF), where he served as director of clinical services in the Division of Nephrology and was promoted through the academic ranks to full professor in the Departments of Medicine and Epidemiology and Biostatistics where he remained until joining the Stanford faculty in 2007.

In addition to an active clinical practice, administrative responsibilities, teaching and mentoring, Dr. Chertow has developed and maintained a robust clinical research program. He has served or is currently serving in leadership roles for multiple NIDDK-, NHLBI- and VA-sponsored clinical trials, including HEMO, DAC, ATN, FHN, SPRINT, PRESERVE, ISCHEMIA, CURE-GN and TiME, and for several industry-sponsored clinical trials including TREAT, EVOLVE, BEACON and SYMPLICITY. He has served in an advisory capacity to the Medicare Payment Advisory Committee and National Quality Forum on issues related to the ESRD program, on NIH study sections and in multiple roles with the American Society of Nephrology, including the Public Policy Board and as JASN associate editor. Dr. Chertow’s extensive authorship, co-authorship, editorship and publication record includes:

Dr. Chertow was honored by the American Kidney Fund in 2007 with the National Torchbearer Award and in 2011 with the Nephrologist of the Year Award in recognition of his contributions to the care of persons with kidney disease. He was elected to the American Society of Clinical Investigation in 2004; and, in 2015, received the Belding H. Scribner Award from ASN and was elected to the Association of American Physicians and the National Academy of Medicine.

Back to Advisory Board

Ready to start your study?